AMONG THE PURPORTED BLESSINGS OF LIFE in the countryside is nature’s primordial gift of tranquility. This is reason enough to take the wilderness trail that rambles toward Eden.

To a human actor too long accustomed to the raucous rattle of the internal combustion engine in its endless procession over miles of concrete freeways, the world-stage of woods and stream with its hushed panorama of starlit nights and morning mists on the distant mountain is welcome respite for a pilgrim seeking solace for the soul.

This is not to say that nature is well endowed with silence as it once was in that time-before-time when the Earth was a prehistoric habitat, minus creation’s crowning achievement known as homo sapiens (the “wise guy”) whose penchant for disrupting the reigning tranquility with all manner of congestion and noise is among the least admirable of his achievements. The presence of the human actor, on any stage, changes the disposition of the blue bird and the outlook of the fox, to say nothing of the godly lay of the land.

Believe it or not, but here in Campbell County, Va., those who have “generationed” among these rolling hills and farmlands are quite accustomed to the still-to-be-reckoned-with sound of the yelping foxhound driven by a drove of hungry hunters trotting around on horseback. Eager packs of dogs with their noses to the ground, numbering in the dozens, chase passionately through field and forest in unyielding pursuit of the forever sly but increasingly helpless old fox. 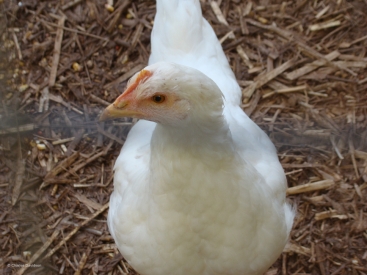 The sputter of the four-wheeled tractor and the screech of the earth-moving bulldozer have long since disturbed the fox’s peace as routinely as any natural four-legged enemy ever did in the wild. Thus the fox by day, which once preyed upon the chicken as sport by night, can hardly find a lively henhouse anywhere that does not belong to the game of agribusiness, which in the free market system has virtually eliminated the free reign of the chicken. In such diminished rural splendor, with beer can and wine bottle flung into nearly every roadside ditch, there is nevertheless, if but for a time, ample supply of the foxhound. It keeps the fox dizzily on the run from the hunter at its back, while losing the battle against urban sprawl at its front.

My yellow Lab, Buddy, and I were on our early morning walk the other day in witness to the spring sunrise that was breaking over the horizon when we spotted the sleek gray form of a fox heading south down the tarmac road in front of us. Its head turned back, glaring, and with little wonder, it was checking to see whether its symptomatic paranoia and depression were sufficient to warrant the fox doctor’s diagnosis of a clinical disorder.

If I were the fox instead of the therapist, I would have prayed that the man and his dog keep the Prozac to themselves. Heaven forbid the day when pharmaceuticals find their way into the drinking water! For the last thing a fox needs is to be drugged into a state of euphoria in which all lingering anxiety about the devastating wiles of the human family system into which the fox has been endlessly hounded and gunned down should suddenly dissipate. It is bad enough that the fox’s collective unconscious is no longer able to remember a primordial age that was decidedly pre-human. It will be even worse when the fox’s best defense against extinction, its capacity to produce a birth rate higher than its death rate, no longer works in its favor. To be sure, utter disaster will prevail when the residual effect of “the morning after pill” in the drinking water puts an end to the fox’s survival forever. No wonder the old fellow instinctively turns its head over its shoulder to see what is coming at it from behind. Yesterday it was the foxhound, today polluted rivers and streams.

Likewise, within the greater scheme of nature’s changing state of tranquility, the rumble of the logging truck comes thudding and blundering round the bend in the road where I live, destined for chopping up and spitting out what’s left of a pulp and paper economy in which the fast-growing pine supplants the slow-growing oak and maple. The driver of the Big Mack, with its friction decibels increasing in loud crescendo, careens his way down the same road that the fox takes in search of a safe crossing to the obscurity of shrubs and trees in which to hide its bewilderment.

Subsequent to the Fall, the road from Eden was first a fox alley, then a Native footpath, then a horse-and-buggy mud track, then a trail blazed in gravel for the Model-T, and then, at last, a drag-strip for the after-school racings of Generation Y in its red sports car going nowhere faster than it can go everywhere, which is halfway across the world via television and the Internet to every other place of like kind that is short on tranquility and high on discharging energy.

Yes, I thank God for every vestige of quiet that prevails here within this oasis of “New Concord.” At the moment there is nothing stirring other than a gentle breeze fanning the white pedals of the dogwood and the rustling leaf of the magnolia. Neither a cow moans in the distance, nor a cloud billows with lightning and thunder over the mountain. There is deep silence….

Well, I should say, there was deep silence. For the carillon inside the white clapboard tower beneath the church steeple is abruptly blasting forth a hymn of glory. Its bells are ripping through the silence like a rocket taking off into outer space. Dog Buddy, his nose to the sky, is howling for all he’s worth, in tune with the mighty Glory. “Nearer, my God, to Thee, Nearer to Thee!” Though like the wanderer, The sun gone down, Darkness be over me, My rest a stone: Yet in my dreams I’d be Nearer, my God, to Thee… wrote Sarah Adams in 1841, six years after this faithful congregation was founded.

And if so, then like the fox and the bluebird, who for the most part maintain their silence through all that is spinning around them, we draw our silence before God in the midst of the tumult by standing apart from it. For this is how God draws near to us, first apart, then close at hand.

Wherever we are on this rambling wilderness trail in our return to Eden, given as we are but a fleeting acquaintance with the primordial gift of tranquility, when we pause long enough to listen — to listen deeply — we hear below the surface-noise a holy silence that is solace for the soul.

The secret is in the vigil of watching and listening — listening to what is stirring down under, not only in nature, but at the very heart of nature, that is to say, to what is rousing from the depths of every living creature whom God knows by name and calls by name. Even the fox on the run that falls to the hunter, and the bluebird on the fly that does not return to the nest, and the generations of the human species who fling their anxieties like empty beer cans and broken wine bottles into the far ditch as though there were no tomorrow over which to fret.

We know that we too will observe our silence in due time, when the Spirit is right, when at last the eye is able to see and the ear is able to hear – O, Holy Silence.

Charles Davidson, writer and editor, is a retired Presbyterian minister, psychotherapist, and professor of pastoral theology, care, and counseling. He is the author of Bone Dead, and Rising: Vincent van Gogh and the Self Before God (Cascade Books, Wipf and Stock Publishers).

LIFE’S MOST SIGNIFICANT TURNINGS arise not so much from conscious awareness of obvious destinies as from unconscious streams of necessity to which we are irrepressibly drawn. Painting, like poetry, song, or dance, is vocation — a “calling forth,” a “summoning” — and in that sense a “birthing” of something deep from within, tied to a transcending future with primal roots in a grounding past. (Bone Dead, and Rising, 69)

The Gospel of Mark for the Age of Trump